New Years in one of the Chinese traditions that is still around. The country seems to be on a fault line between western consumerism and ancient traditions. But Chinese New Years is still as traditional.

If you are wondering what all of the noise is about… it all deals with the mythical monster nian (the same word as year). Loud sounds, red envelopes of money and the color red keep him–and bad luck away.

For good luck, a wheel of firecrackers will be ignited by your doorstep at the crack of dawn to keep evil spirits from entering your home. The wheel is slightly smaller in size than the one Vanna spins.

Eveyone is in on the fun, even the pets. I wonder if this lady got her dog ear plugs or a few doggie downers.

The year of the horse is chasing out the year of the snake. So if you are a Mr. Ed, you need to wear red underwear all year long for good luck. You can find your chinese horoscope character at this link. http://chinese.horoscope.com/

But while Chinese New Years is still old style, other traditions are slowly changing.

are being replaced with this contraption.

Scary unidentified street foods are being replaced with…

Even the most traditional prefer their i-phriends to whoever is sitting next to them.

And chickens that used to cross the road?

They now take an e-bike. What is this world coming to. 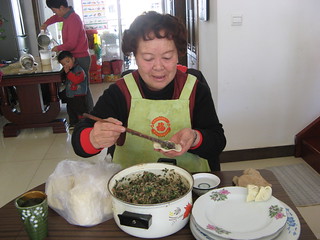 Today, again my eating habits went off the beaten Mc-path. I went to a jiaozi making party. Spring Festival AKA Chun Jie AKA the Chinese new Years is just around the corner and making jiaozi is as traditional as green jello and bananas at Thanksgiving. You dab a little of the filling on a piece of rice dough, use a little water to seal the edges, pulling the edges to the middle then crimping. This thousand year old recipe sounds simple enough for a two year old to do…

Here are instructions from Chef Jacob. 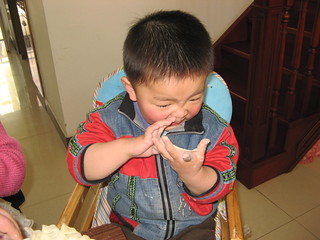 Squish it into your hand and be tempted to lick the raw pork off your fingers until your Mom stops you. 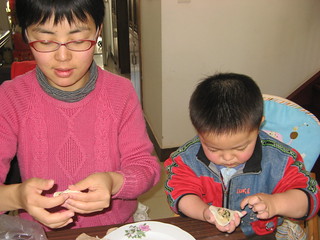 Then you show her your masterpiece… 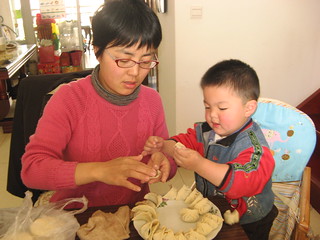 Jiaozi got their named because they are supposed to be horn shaped. The Chinese word for “horn” is jiao. Well, here are the ones made by momâ¦. 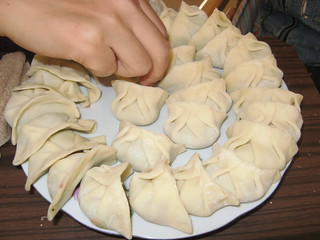 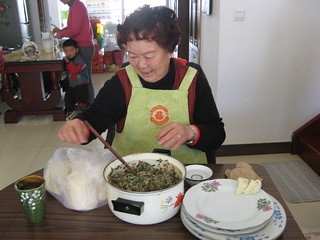 Now here are the ones made by guess who. 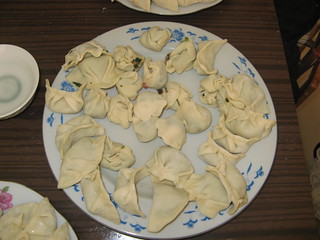 Afterwards, we indulged in stuffing ourselves with the dumplings, some of the steamed, some fried, along with slices of beef dipped into a peanut sauce (very similar to the satay sauce you get an a Thai restaurant). 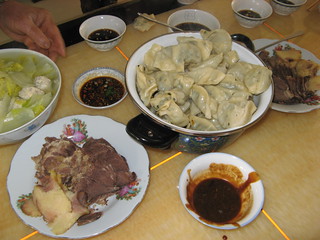 The stuffing for jiaozi varies in different regions of China. Mostly, itâs a mixture of ground pork and chopped chives hidden inside a transluscent rice flour dough.

Or with Jacob, maybe a bit of lint. 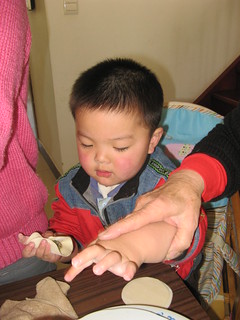 I donât think Jacob will win an appearance of the Next Top Chef. 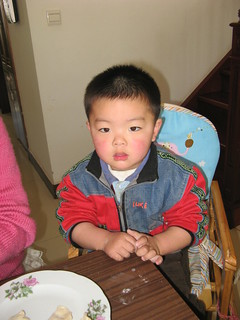 But hey, you never know.

It is day two of my Chinese food log, which gets lost in translation to those fluent in Weight Watcher-ese.
As I said in the previous post, I thought my eating habits were boring until I started writing them down. Today, I ate more than normal, but still a variety of âChinese normalâ.
Anyway, I started the day with a glass of freshly squeezed Michigan Orange Juice (the infamous Chinese Great Lakes Brand) and a bowl of honey nut cheerios topped with shelf stable milk. We buy the French brand at close to 3 bucks a pop, thinking it would taste a bit better. Itâs still is on the sour side.

I decided to get out so I peddled my bike to CafÃ© Luku for a cup of latte. If you recognize the name, cafÃ© luku is the East Timor name for the coffee made from beans squirted out of a Civetâs butt. Iâll stick to a latte , please.

After running a few errands in down town Kunming, I couldnât resist a bucket of street fries. The Chinese street vendors do potatoes better than McDonaldâs, peppering up the taste with loads of spices and chives.

However, I resisted buying water at the corner drink-lingerie stand.

I ended up getting a cup of hot red rice tea. It tastes like a thick vanilla milk shake except itâs riceâ¦hotâ¦and uh, purple.

After all of those binge indulgences, I find something really weird to nosh on in China:

Jenny Craig, Weight Watchers, South Beach, Dr. Atkins, the Oprah
yo-yo. You have heard of these diets, but have you ever heard of the Trader Joeâs
vanilla bean ice cream diet?

I know. Not a very successful one.

It was my friendâs  idea and yes, it failed miserably, which is
why sheâs on the âGinger, Can You Keep A Food Log With Me-diet”? She is
documenting everything she puts in her pie hole and asked me to do the same.

Itâs still day one and my eating habits are weirder than I
thought.

Take for instance my bootleg breakfast. I had half of
bagel topped with questionable SKIPPY peanut butter (the trademarked name written is
in the wrong font)  chased with glass of
the Chenglish brand of Orange Juice called Great
Lakes. Sorry, but  oranges are not from Michigan.

For lunch, I took advantage of Jeff being out of town and treated
myself to half a pod of durian. Durian resembles larva from an alien, hatched from a spike covered egg.  Many believe it tastes like it, too.

Along with the durian, I had a baozi. Boazi are round steamed
buns ranging in size from a golf l to a soft ball, filled with mushrooms, veggies,
meat, or sometimes, something sweet. I also nibbled on a mini custard pie and
sticky rice thingy.

For dinner, I made Ji Tong (chicken soup) with lotus root. Chickens
are sold with the appendages attached. Lotus–pronounced âOâ in Chinese–  is this huge white root thing that resembles an edible sand dollar when you slice it open.

I donât like how this flock is all giving me the chicken
finger.

For desert, bought myself a little rice cake, not the dry
ones you choke down while dieting, but one special made for Chun Jie  or New Years. These cakes are steamed, not
baked, and as they cool, they deflate in size.

For snacks, I nibbled a few goodies that my teens turned me
onto. Pig face, (sweet porky jerky is fantastic), Then there is something called
cat food (spicy tofu sticksâsomething
similar in texture to old licorice but a spicy kick that could singe a few nose
hairs). Also, spiced chicken feet. You donât eat them, you just gnaw on them.

This is the package of the katfood. I think hairballs are the
chief ingredient.

Anyway, it was all chased with a bit of Chinese white wine, which is
nothing more than rubbing alcohol in a fancier bottle.

So thatâs the kind of stuff in my food log.

Have fun with that, Jenny.

Before the holidays, I got into an impromptu discussion with my class about death.

My seemingly innocent students were working on novels which revealed their sinister sides. Many of my young authors were guilty of murder, body dismemberment and turning children into school supplies in order to remove their heads with pencil sharpeners. Charlesâ story was my favorite, featuring aliens that came to earth to give students bad haircuts. In return, the mulletized middle-schoolers murdered the aliens, rightfully so.
Â âMrs. Mac, do you fear death?â
Â I responded, âI donât death, itâs the seven minutes between life and death that I am not looking forward to”
Â âWhat do you mean?â

âThe seven minutes it takes for your heart to realize that your head has been removed with a pencil sharpener doesnât seem very pleasant.â
âOh.â
Â Well, that seven minutes between life and death is beginning now.

Not for me, for my mom.
Iâm on hospice duty waiting for the last grain of sand to go thru her hourglass.

It sucks.
What is hospice?
It’s pallative or pain-control care for patients who have cashed in their chips, resigning to the fact that they ainât gonna get better.
Â In other words, these guys do death right.

Hospice patients get doped up, doped up some more and are wished happy travels to lifeâs next adventure. After all, they arenât driving.
Hospice can happen at a facility or in one’s home, which is the route we chose.
Anyway, Momâs hospice nurse arrived with mother lode of goodies including vials ofÂ  pain killers administered with a Darth Vader style mask.

All of which she didnât give to my mom until after she inserted the catheter.

She left a stack of pamphlets that explained the stages of death, from the first few weeks to the final hours.While there isn’t a crystal ball that can reveal the time and date of one’s final exit (wouldn’t that be convenient for the rest of us), the guidelines are accurate and healing.
Â I helped my sister rearrange her home to accommodate enough hospital equipment to open her own walk-in clinic. It included a hospital a Hoyer lift, which is a fork lift of sorts for old folks to hoink my Mom from her TV chair to hospital bed.
That way, she can watch The Price is Right right up to the end.
Meanwhile, Charlesâ seven minutes came a zillion minutes too early. The ending to his alien barber adventure will forever be a mystery.Â