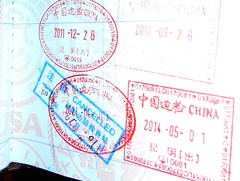 Fear
of all fears.
I love shows like Locked Up Abroad but I never want to star on them.
Yesterday, on my way to Thailand for a medical checkup, I came close. I was at Kunming
Airport, with no known contraband other than a specimen cup.
But while standing in line at Border Control, the official saw something
suspicious on my passport. He got his supervisor took one look at me and then
confiscated my passport.
Yes, my passport.
Jeff and I gulped.
It would be freaky enough if the officials spoke English; but add to it the
language barrier, a loaded colon and a plane to catch, I was leaving in my
shorts what I wanted to drop off at Bumrungrad.
The officials took my passport and disappeared. Every 15 minutes, one would
come out and say, “It will be another 7 minutes. No worry, you no miss
flight.”
I speed-dialed my employer’s school’s on-call translator (who is available for
emergencies like this and for when I need help finding shoe strings at
Wal-mart).
I dialed her, handed the phone to the Border Control Official and then said my
prayers.
Crazy thoughts went through my mind.
Was there a problem with my VISA?
Did someone steal my passport number?
Was a Chinese national trying to pass herself off as a platinum haired
mÄiguÃ³rÃ©n?
No.
The numbers of entry date stamp were transposed,what should have been the year
2012 was stamped 2021.
This took about 45 minutes and for the officials to correct, two years after
the initial mistake.
Which, will probably cause more airport delays in my future.
As for now, I won’t be making a guest appearance on my favorite show.


One Response to “Passport Confiscated!”