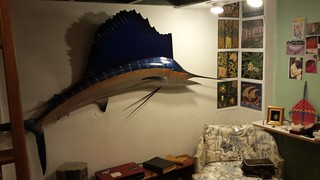 While most wills leave loved ones big estates, bank accounts or cars, I was left something bigger than I could ever imagine.

Julie and eyed the eighty four inch fish, reeled in by my four foot eleven Aunt and bequeathed to me.

It was hanging over her king size bed, the blue wash board fin larger than
the headboard. She was helping me pick up âMarleyâ along with some
other belongings that my Uncle Jack insisted Iâd have.

Considering
that the only possession of value that I owned was a wok, I was
grateful for any handouts, including the two swivel chairs from the
seventies, perfectly preserved in plastic covers.

âItâs all
yours,â my Uncle Jack beamed, his bald head perfectly round. My eyes
zoned in on the scab thatâs been on his nose since the last time I saw
him.

He shuffled over to a bookshelf. âDonât forget these.â Jack piled onto my
booty three new books my Aunt wrote on nursing. They never made the New
York Times best sellers list, but were translated in Chinese and Spanish
nonetheless.

âOr this.â His stubby old hands picked up a flowered
suitcase. The sight of the petite canvas suitcase unzipped a boatload
of memories.

I gave my uncle a big hug, his flannel shirt dwarfing his shrinking body, then loaded the van.

The nose of the fish almost reached the radio, making changing stations
difficult. We listened to a static-laden WXRT as we made it to Chicago,
the marlinâs open mouth giving the impression it was singing to the
Beatles.

As we pulled into the front of our building, the Friendly
Towers, I scratched my head. âOkay Julie, now that I got the fish, how
do I get it on the wall?â

Julie threw on her flashers. âBen will help you.â

âAll
of the guys at Jesus People look like Jesus,â I grunted, âeven the
crust punkers.â

âBut Ben doesnât have tattoos or a nose ring.â She
popped open the back door. âJust a real  deep voice.â

Julieâs
description helped. After we unpacked the van and managed to get the
marlin into the lobby, I snooped around the dining hall for a tall, non
pierced version of Christ and saw Ben, lurching over the fruit bowl with
a banana in his back pocket. I asked him if heâd help me with the fish.

âA seven foot marlin? Let me get me drill.â Julie wasnât kidding. Benâs voice was smoother than a baritone sax.

As
Smooth Jazz Jesus put the fish on my wall, I surveyed my booty, placing
the preserved chairs in the room and the pristine books on my
bookshelf. I anxiously unzipped the flowered suitcase, wondering what
was inside.

I was hit with a blast from the past– the smell of my
Auntâs face cream–which powered the musty smell of the other
treasures. Letters from her brother during WWII. A tattered report card
from elementary school. A faded Baptism certificate. Coral earrings and
cocktail rings. Yellowing news clippings of my Aunt in various hair
styles and eye frames, receiving accolades for her work.

So there I was, in my fishbowl size room with one heck of a large roommate. Next to its nose, I hung up a two inch clipping, Local Girl Gets Post at Illinois U and smiled.

I donât know which  was the biggest catch.